Hashimoto’s Thyroiditis (HT, or Autoimmune Thyroiditis) is the most common organ-specific autoimmune disease worldwide and the most common cause of hypothyroidism. It results from the loss of immunological tolerance to thyroid antigens and causes an infiltration of immune cells into the thyroid causing eventual organ disfunction or blocking of thyroid hormone action (TSH) and subsequent hypothyroidism1.

Inflammation and immune system infiltrate into the thyroid cause an increase in circulating thyroid antibodies: anti-thyroglobulin (anti-TG) and anti-thyroperoxidase (TPO)2. The rise in these antibodies often proceeds overt hypothyroidism and the typical rise in TSH expected as thyroid function declines. Patients may begin to experience changes in energy, metabolism, hair loss, menstrual dysfunction or other symptoms classically reserved for clinical hypothyroidism before changes occur in thyroid hormone status2. Diagnosing HT includes testing for thyroid hormone function as well as testing for the presence of thyroid antibodies in the blood. Patients may have elevated thyroid antibodies and normal thyroid function at the onset of the disease but will typically progress over time to hypothyroidism2.

Nutrients have been studied for their role in both the production of autoantibodies and the subsequent thyroid disruption caused by Hashimoto’s thyroiditis such as selenium, vitamin D and iron.

Observationally it appears that vitamin D deficiency both increases the risk of HT and is corelated to levels of autoantibodies in patients with HT. These findings are consistent across age groups, seasons and in different world regions3. Vitamin D is an immunoregulator and has been implicated in multiple autoimmune disorders4 including HT. Vitamin D regulates the production of various immune cells including T cells.

Selenium deficiency throughout the world has been implicated in the development of HT7. Selenium is necessary for the production of thyroid hormones8 and glutathione peroxidase – a potent antioxidant. The deficiency of selenium is thought to impair natural redox reactions in the thyroid, which leads to inflammation and the promotion of autoimmunity.

Iron is essential for thyroid function and supports, TPO, one of the enzymes needed to produce the thyroid hormones T4 and T38,12 and patients with HT have lower levels of iron than patients without13. Hashimoto’s thyroiditis may be linked to iron deficiency for multiple reasons. Patients with HT have higher prevalence of both celiac disease14 and autoimmune gastritis15, both of which cause iron deficiency. Hypothyroidism itself also impairs iron absorption and can lead to iron deficiency8. Patients who are treated for their hypothyroidism with medication often have an improvement in their iron status over the first year of treatment16.

Iron is necessary for thyroid hormone production and restoring iron status helps improve thyroid hormone levels17 and improves symptoms in patient’s treated for HT but who remain symptomatic after medication18.

Patients who have been diagnosed with Hashimoto’s Thyroiditis (HT) benefit from screening for nutrient deficiencies such as vitamin D and iron and from support with additional nutrients such as selenium. These nutrients are involved in healthy thyroid function, anti-inflammatory pathways and immune regulation and offer patients with HT an additional support.  For patients with suspicious symptoms of low thyroid such as fatigue, poor temperature regulation or dry skin19, testing antibody levels against the thyroid may identify a progressive change in thyroid function and diagnose Hashimoto’s Thyroiditis. A diagnosis of HT allows practitioners to look at nutrients and medication options that can stall or reverse thyroid changes and restore wellbeing in patients before they may require medication.

18. Soppi. Iron deficiency is the main cause of symptom persistence in patients treated for hypothyroidism. Thyroid 25, A-74 (2015).

Harnessing True Beauty from Within 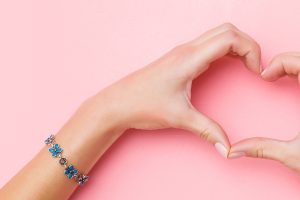 PCOS: A multifactorial condition that requires a multifaceted approach